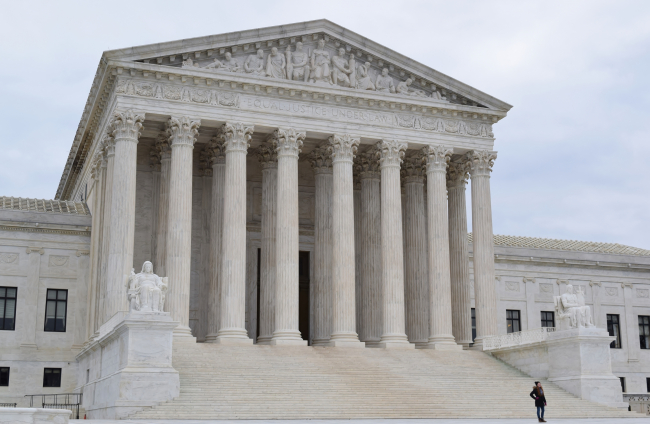 Today we feel like the author of Psalm 149: “Let the high praises of God be in their throats and two-edged swords in their hands” (149:6). Today we speak “the high praises of God,” because of God allowing Roe to be overturned. The prayers and hard work of millions of Christians over decades has been rewarded in a major legal victory. So, today is for "high praises." And then tomorrow we'll take up our figurative “two-edged swords” to continue to fight for laws in our land that protect life—from conception.

For almost 50 years Christians have marked a Sunday near January 22nd as “Sanctity of Life Sunday” (or “Sanctity of Human Life Sunday”). That's the anniversary of the 1973 Supreme Court decision we call simply, “Roe v. Wade.” It was this decision which infamously opened up a floodgate of abortions that currently number somewhere around 60 million—60 million abortions since January 22, 1973.[1]

But now there's another date to place on our calendars, June 24, 2022, the day the Supreme Court overturned Roe v. Wade (and the 1992 Casey decision as well). They also voted 6–3 to uphold a Mississippi law banning abortion after 15 weeks. The opinion is Dobbs v. Jackson (MI) Women’s Health Organization. Likely it will be referred to simply as “Dobbs.” The full opinion is available here.

The key result of the decision is that abortion laws can now be written by the people best suited to write those laws, not unelected justices chosen to interpret laws but elected representatives chosen to write laws. The great problem of Roe was that it was used to block almost all laws within the states limiting abortions. Now that stumbling block is removed. This means, of course, that the battle enters a whole new phase, as we work toward passing state laws forbidding abortion. Winning Dobbs was not winning the war, but it was winning a major battle within it.

Alito opened his opinion by saying, "Abortion presents a profound moral issue on which Americans hold sharply conflicting views" (1), and then he concluded by saying,

Abortion presents a profound moral question. The Constitution does not prohibit the citizens of each State from regulating or prohibiting abortion. Roe and Casey arrogated that authority. We now overrule those decisions and return that authority to the people and their elected representatives (78–79).

Alito is entirely right. Abortion is no mere technical legal matter or obscure political concern. It's "a profound moral question," one which the citizens and their "elected representatives" need to discuss and debate and then vote on.

Earlier in even stronger language he wrote,

Roe was on a collision course with the Constitution from the day it was decided, Casey perpetuated its errors, and those errors do not concern some arcane corner of the law of little importance to the American people. Rather, wielding nothing but “raw judicial power,” Roe, 410 U. S., at 222 (White, J., dissenting), the Court usurped the power to address a question of profound moral and social importance that the Constitution unequivocally leaves for the people….The weaknesses in Roe’s reasoning are well-known. Without any grounding in the constitutional text, history, or precedent, it imposed on the entire country a detailed set of rules much like those that one might expect to find in a statute or regulation (Alito, 44, 46).

Alito’s point about Roe's lack of "grounding in...history" is a strong one. His opinion went to great lengths (29 pages in an appendix) to show the abundance of laws within the states outlawing abortion at the time the 14th amendment was ratified (1868) and at the time Roe was written (1973). He shows forcefully,

The inescapable conclusion is that a right to abortion is not deeply rooted in the Nation’s history and traditions. On the contrary, an unbroken tradition of prohibiting abortion on pain of criminal punishment persisted from the earliest days of the common law until 1973 (Alito, 25).

Dobbs undoes the notion of "a constitutional right to obtain an abortion" (15), which is so central to the Roe and Casey opinions. This opens the door to legislatures to once again pass laws outlawing or limiting abortions.

This is welcome news for Christians who hold tightly to the clear biblical ethic on life and the unborn:

There is also a drumbeat in the Bible of God's people defending the rights of those unable to defend themselves (Exod 22:22; Deut 27:19; Ps 94:6; Jer 22:3; Mark 10:14; Heb 11:32–34). These truths mean Christians will be advocates for justice for all people—the born and the unborn. And we'll be engaged in helping those who need help—ones facing unplanned pregnancies, being involved in adoption, foster-care, financial and practical assistance for young moms, etc.—using the resources God has given to us.

Alito spelled out that with Dobbs the "authority" to regulate abortion is removed from the Court and placed where it should be, with "the people and their elected officials" (79). That means the legislative process, which is democratic and thus unpredictable, messy, and time-consuming—and it creates opportunities where you can either win or lose, sometimes epically. And yet, just having the chance for a fair fight in the proper arenas is so encouraging.

Yes, there is much work ahead.

But on this day we stop and reflect on the efforts made to get us to this point. I certainly can’t begin to know all of them, but these come to mind:

We don’t yet know the long-term status of abortion in America. My sense is that there will be a significant reduction in the frequency and casual acceptance of it. Making it harder to get an abortion in even half the country will absolutely result in many fewer abortions. May God make it illegal here in our own state of North Carolina. And who knows what will happen in those states where abortion is currently protected? God moves mountains and may change those laws, too. Time will tell.

But no matter what comes tomorrow, today it is fitting to stop and give thanks to God for hearing our prayers and moving to defend those least able to defend themselves.

Make a joyful noise to the LORD, all the earth!
Serve the LORD with gladness! Come into his presence with singing!
Know that the LORD, he is God! It is he who made us, and we are his;
we are his people, and the sheep of his pasture.
Enter his gates with thanksgiving, and his courts with praise!
Give thanks to him; bless his name!
For the LORD is good;
his steadfast love endures forever,
and his faithfulness to all generations. (Psalm 100)

Praying for the Nations