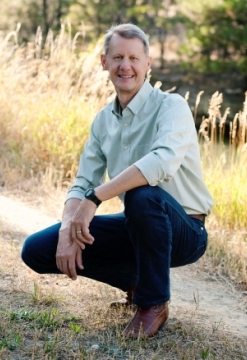 On March 23rd, Ken Sande will be with us to teach key principles of relational wisdom (sign up, pick your lunch). If his name is a new one for you, I'd like to introduce him a bit. You can find out more about him on his ministry website, but here is some of his journey in his own words.

By God’s grace, I’ve had the privilege of founding two organizations that are dedicated to preserving and transforming relationships: Peacemaker Ministries and Relational Wisdom 360 (RW360).

I was raised on a ranch in Montana. Initially trained as a mechanical engineer, I worked for a medical research and development company in California. Leading a team of creative and highly competitive engineers triggered a life-long interest in building relationships, conflict management, and creative problem-solving.

I eventually returned to school in Montana to pursue a degree in law, thinking I would apply my engineering background to product liability litigation. But God had other ideas.  A year after graduation, he called me into biblical peacemaking and led me to found the Christian Conciliation Service of Montana, which eventually grew into Peacemaker Ministries.

I spent thirty exhilarating years leading the Peacemaker team, whose vision is to “transform relationships with the power of the gospel.” During that time I taught in hundreds of settings throughout the U.S. and the world and mediated countless conflicts ranging from simple personal disputes to church splits and complex lawsuits.

Drawing on these  experiences, I authored The Peacemaker (which has sold over 500,00 copies in seventeen languages), and coauthored three related books. I also helped to produce numerous articles, video series and training resources that are now being used to equip peacemakers around the world.

The Gospel Thread, A New Direction

The common thread through all of these resources is the gospel of Jesus Christ, the good news that God so loved the world that he sent his only Son to die for our sins and be resurrected to new life so we could be reconciled to God and enjoy him forever, live in peace with those around us, and experience increasingly fulfilling relationships....

In 2011, I sensed that God was calling me to shift my focus from resolving conflict to preventing conflict by building healthy relationships. I began to develop and teach a concept I call “relational wisdom” or simply “RW.” The response to this concept was enthusiastic....

A Long Marriage and a Smart Dog

I have been gratefully married for thirty years to my wife, Corlette, who has actively partnered with me in ministry. Her Young Peacemaker curriculum is so biblical and robust that it has been used to teach conflict resolution not only to children around the world but also to former drug dealers in prison.

Corlette and I are blessed with two marvelous children, three captivating grandchildren, and one of the smartest dogs in the world....

In my free time, I enjoy reading, running, hiking, and skiing in the Beartooth Mountains just south of our home in Billings, Montana. I’ve served as an elder in the Presbyterian Church in America (PCA), and Corlette and I presently attend Cornerstone Community Church.