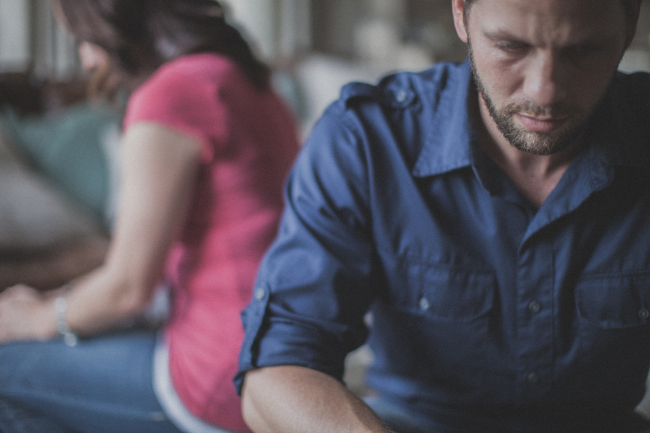 Adam and Eve teach us volumes about God's intentions for men and women and marriage. The paradise of Eden was a place where the first man and the first woman enjoyed a marriage entirely free of sin. We can't say how long this sinless harmony lasted, but for at least a moment the man was the head of his home and the woman his happy helpmate, and both were in peaceful fellowship with the living God. But in this third installment in our series we'll see the darkness of the fall descend. And in its aftermath, gender, marriage, and everything else related to relationships, identity, physical and emotional health, and all that makes us human will be corrupted.

Genesis one and two are as glorious and inspiring as chapter three is tragic. Genesis 3 records the sad undoing of the harmony of Eden and the corruption of the entire universe. While we could go into great detail about this chapter, the two points we want to make relevant for our discussion here have to do with original sin and the impact of the fall on gender roles.

First, “the fall” or “original sin” as it is sometimes called, was the moment when Adam—not Eve—sinned. This is important. While it is true that the woman was deceived first, “the fall” of creation happened because of Adam’s sin—not Eve’s. Romans 5:12–21 says that “sin came into the world through one man, and death through sin” (v. 12). It is the “transgression of Adam” that caused such devastation and not the sin of Eve. This is another pointer to the gender differences between a man and a woman.

The fall brought sin and death to all humanity, and this has a profound impact on how we relate as men and women also. Just as crops, mountains and the universe itself are corrupted and long for their own redemption when Christ returns (Gen 3:17; Rom 8:19–22), so men and women are impacted in every facet of their lives by the fall of Adam. Where Adam and Eve in Genesis 2 are in beautiful harmony together, because of the fall Eve’s “desire shall be contrary to your husband, and he shall rule over you” (3:16). The “helper fit for him” now has an enemy within her (sin) that will at times cause her to rise up and reject his authority and work against his success instead of working for it.

And second, it’s critical to see the order of Genesis 1–3 here. Gender and gender roles are given before the fall and then corrupted by the fall. At times people seem to assume that gender roles are the result of the fall, but this is not true. Sin does not create gender roles, it corrupts them.

Sin can tempt a woman to want to rule her family and usurp the place of her husband; sin can also tempt a woman to suppress her intelligence and creativity and take on a doormat posture. Sin can tempt a man to be an abusive tyrant in his home and ignore the full integrity and dignity and capabilities of his wife; sin can also tempt a man to be utterly passive and maybe even absent in his place as head of his family. Once again, such behaviors are not because sin has created gender roles, but instead show how sin corrupts them.

From Euphoric to Dysphoria

We’re seeing in our day that not only does sin corrupt gender roles, but it also distorts our understanding of gender itself. The phrase “gender dysphoria” captures an experience that many have, where they feel out of alignment with their God-given bodies. They are born male but feel like a female, born female and feel like a male, etc. Some kind of internal confusion is not uncommon as we grow from children to adults. When it persists it can be troubling and problematic.

Our culture has not helped, for it wants to encourage and even celebrate such abnormalities instead of guiding people to healing and acceptance of their God-given sex. Thus, the dysphoria itself and the unbiblical responses of some to it are both evidences of the fall.

The church needs to be a place where people can find help and healing in such circumstances, not judgment and bigotry. But part of the help and healing is pointing people back to God’s good plan in creation, where we are made “male and female” and our bodies reflect God’s intentions for our lives.

Andrew Walker's God and the Transgender Debate and Kevin DeYoung's What Does the Bible Really Teach About Homosexuality? are grace-filled, solid treatments of issues related to gender, gender dysphoria, same-sex attraction, and a whole range of topics related to these.

Many of us feel these sinful tugs in our heart that tempt us to distort our God-given roles (and gender). Yet, the gospel meets us right here in this place of need. The truth that God sent his only Son to die on the cross for our sins and then raised him to life and then unites us to him by faith through the Holy Spirit means everything.

It is forgiving grace to the wicked wrecked by a life of rebellion against God: “To [Jesus Christ] all the prophets bear witness that everyone who believes in him receives forgiveness of sins through his name” (Acts 10:43). The gospel is transforming grace that lovingly and persistently shapes us into conformity to Christ (Rom 8:29). The gospel is power and ability to walk in “newness of life” (Rom 6:4). And the gospel is God’s seal and unbreakable bond that we will one day be perfected and glorified (Rom 8:30).

So, even while sin remains a temptation for the Christian, grace is greater. A born-again husband and a born-again wife can walk according to the loving and intelligent complementarianism we see displayed in the Bible.

Complementarianism Part 2: Differences that Make All the Difference