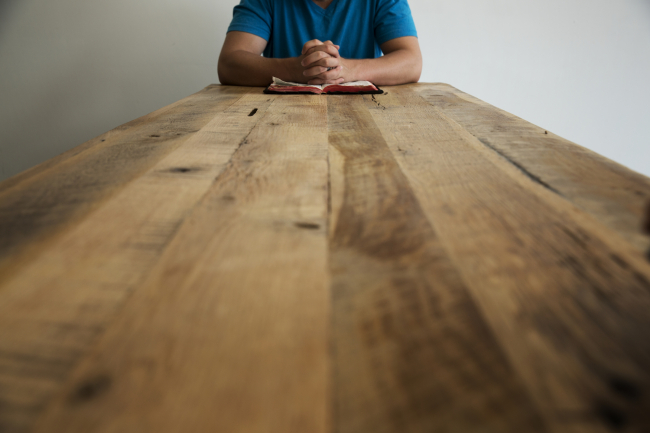 On the night before D-Day, June 6, 1944, Dwight D. Eisenhower distributed a message to the troops involved in the invasion:

You are about to embark upon the Great Crusade, toward which we have striven these many months. The eyes of the world are upon you. The hope and prayers of liberty-loving people everywhere march with you. In company with our brave Allies and brothers-in-arms on other Fronts, you will bring about the destruction of the German war machine, the elimination of Nazi tyranny over the oppressed peoples of Europe, and security for ourselves in a free world….I have full confidence in your courage, devotion to duty and skill in battle. We will accept nothing less than full Victory!

But he also wrote a second note. It was hand-written, thoughts jotted down in case of a defeat. He kept the second one in his wallet:

“Our landings…have failed to gain a satisfactory foothold and I have withdrawn the troops. This particular operation [He scratched this out and replaced with] My decision to attack at this time and place was based upon the best information available. The troops, the air and the Navy did all that Bravery and devotion to duty could do. If any blame or fault attaches to the attempt it is mine alone.”[1]

He was so nervous he got the date wrong and wrote July 6 instead of June 6. These two notes provide a window into the battle before the battle for Eisenhower. Many private battles like this one were fought before the very public battle of D-day.

Jesus' Battle Before the Battle

Mark 14:32–42 records Jesus' own battle before the battle. It takes place in the Garden of Gethsemane.

This is a battle Jesus fights alone. Entirely alone. There are no guns or tanks or ships or paratroopers that are going to come in and save him from what's coming.

And in his case, it's not failure that scares him so much—but success. God's plan of redemption being successful means horror for Jesus.

This scene takes place somewhere around midnight or a little after in the hours before Jesus is taken to the cross. He's shared the Passover with his disciples, washed their feet to model what sacrificial love looks like, and released Judas to commit his great act of betrayal. At this point he separates himself from the rest of the disciples but asks Peter, James, and John to accompany him. He exhorts them to stay awake and pray. They are too tired and prove yet again that while the spirit is willing the flesh is weak.

He takes them to a place called "Gethsemane," a place not far at all from the Jerusalem walls. At the time the temple would have been in full view.

Gethsemane means "oil press," likely named after a press that would have been used to crush the oil out of the olives picked on that hill. It's a fitting name. Jesus' soul was being pressed almost to death at this point and soon his body would be.

Jesus' distress is profound. Mark says he is even "falling on the ground" (Mark 14:35) as he prays for the hour to pass.

Jesus' prayer has four parts to it, all of them equally important, none of which can be spared. May our prayer lives be marked by all four. Let's see them in turn.

First to see is how Jesus addresses God: "Abba, Father." There is no Jewish precedent for this kind of language for addressing God—not in the OT or any Jewish literature. It is Jesus who introduces it to God's people.

It is a combination of RESPECT and INTIMACY. That's why it's hard to find the right English word to translate it and certainly the reason why all English translations simply keep the Aramaic, Abba. “Daddy” doesn’t work, because it's too casual. "Father" feels too formal. Some have said “dear Father” might come closs.[5]

And yet, part of the marvel of the gospel is that we are invited to address God in the same intimate respectful manner:

For you did not receive the spirit of slavery to fall back into fear, but you have received the Spirit of adoption as sons, by whom we cry, “Abba! Father!” (Rom 8:15)

The work of salvation includes our spiritual adoption, receiving the status of sons who can boldly "cry, 'Abba! Father!'" Paul isn't writing these words from his own imagination. He's taking the words of Jesus and saying we can pray like that.

The first part of praying like Jesus is praying with the blend of closeness and reverence wrapped up in "Abba, Father."

“All things are possible for you”

Second to see in Jesus' prayer is this emphatic statement about God's ability: "All things are possible for you" (Mark 14:36). Twice already in Mark's gospel Jesus has spoken similar words, once when he cast a demon out of a boy (Mark 9:23) and once talking about the rich getting into the kingdom of heaven (Mark 10:27). Healings and conversions are surely evidences of God's omnipotence. Truly, "all things are possible" for our God.

“Remove this cup from me.”

Jesus is really praying, "Remove this cup from me!" It's easy to minimize this statement, as if Jesus doesn't really want the cup removed. But in his humanity with all its normal weaknesses and concerns about pain and death, he desires for redemption to be accomplished in some other way than bearing the wrath of God while being crucified.

Importantly, Jesus is appealing but not refusing. He's not refusing to drink the cup given to him, only appealing that another way might open up. To refuse would be sinful. To appeal was well within the scope of righteousness.

We can imagine a moment here when Jesus waited. Was it a few seconds? Was it minutes? We read Mark 15:36 as if Jesus prayed it in less than ten seconds with no hint of hesitation. But Jesus was fully God and fully man. In his deity there was never a moment's hesitation to embrace what was to come. But he prayed as a man just as much as he prayed as the Son of God. As such he might have waited to see if the sky might open up and those legions of angels might come and another path of redemption present itself.

It didn't. And so he prayed the fourth part of his prayer.

“Yet not what I will but what you will”

In this fourth part of Jesus' prayer he gives voice to his full commitment to will of the Father. He might appeal for a different path but he would not refuse the one the Father had laid out for him. He desired in his humanity to have the cup removed, but his even greater (and divine) desire was to drink the cup handed to him.

John Calvin saw in this moment an example of "the two wills" in Christ:

As musical sounds, though various and differing from each other, are so far from being discordant, that they produce sweet melody and fine harmony; so in Christ there was a remarkable example of adaptation between the two wills, the will of God and the will of man, so that they differed from each other without any conflict or opposition.
John Calvin, Harmony of the Gospels[7]

As I said, there is in this prayer of Jesus a profound model for us. It models for us what bold prayer looks like, that bold freedom to speak of the Creator and Holy One as "Abba, Father."

It models for us an unmistakable confidence that the One we're praying to is fully and completely and easily able to do what we're asking. He might have good reasons for not doing it, but his ability isn't the issue. "All things are possible" with our God.

But then there's that perfect balance in the third and fourth parts of the prayer. We often choose between these. We either pray for something we urgently want or we pray that the Father's will be done. It's helpful to see that we can pray both. We can pray heartily and sincerely for something, but then almost as a check to our souls and reminder of something we want even more, we can give voice to that desire to see the Father's will done.

His will is best, so it's no sign of unbelief or weakness to make that our last word.

[5] See the commentaries by R.T. France (NIGTC) and William Lane (NICNT) for more on "Abba." Also Peter Bolt’s The Cross from a Distance (NSBT).