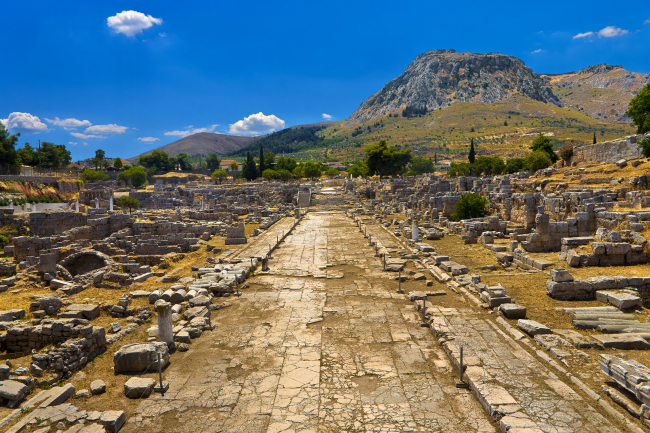 It's hard not to slow down to look at car wrecks. Even though you know it's wrong and you feel guilty for doing it, it's hard not to. Reading 1 Corinthians is a bit like looking at a wreck—except in this case, you're supposed to look! This Sunday, that's what we're going to do, slow down and begin our look at this glorious letter of Paul's to a church he loved.

The Corinthian church is famous for its dysfunction—relationally (they struggle with unity, so much it even affected their celebration of the Lord's Supper), sexually (they have all kinds of bad ideas and bad practices in this area), compromising behavior with pagan temples, Sunday worship prone to be chaotic and disorderly, all with any number of wrong ideas about Jesus' resurrection and return.

And all this took place in a church smack in the middle of a fairly large city—estimates vary greatly, but perhaps 100,000 is a good guess—known for being prosperous, worldly, and diverse. Corinth in southern Greece had the good providence of being located right at the hub of major shipping routes. It had two harbors with a short strip of land between them—about 5–6 miles. The harbor to the west gave easy access to Italy, the harbor to the east allowed access to Asia Minor. Merchants would often choose to deliver their goods across this land bridge instead of taking the more risky route south around the cape. And then because Corinth was on a land bridge between Athens to the north and the rest of the peninsula to the south, it was also unavoidable for that route. In other words, lots of money and business and people concentrated in this ancient city.

To this church, Paul wrote one of his most powerful letters.

Let's take a minute to get a sense of Paul's history with the Corinthians.

Paul planted this church in Acts 18, during his second missionary journey. In Acts 17 he had preached in Athens, just across the isthmus (land bridge). Coming to Corinth he found Aquila and Priscilla, who feature prominently in his ministry. Like he usually did, he went to the synagogue to preach Christ. Timothy and Silas return at that point and join him. The Jews rejected his message and eventually accused him before the tribunal (18:12). Gallio was proconsul and threw out the case. The mob wasn't satisfied and attacked Sosthenes, the ruler of the synagogue. It seems most likely this is the same Sosthenes introduced as co-author (or "amaneunsis," secretary) of 1 Corinthians: "Paul, called by the will of God to be an apostle of Christ Jesus, and our brother Sosthenes" (1:1).

With the church planted so begins one of the most famous relationships between a pastor and a church in all church history. If you've read anything about Calvin and Geneva and their up-and-down relationship, this is something similar.

During Paul's first visit he stayed 18 months (Acts 18:11). He left the city and went to Ephesus for three years. It was there that he wrote 1 Corinthians. The best guess is that this is around AD 54–55, which would be about twenty years after Pentecost and after Paul's conversion. This was a seasoned apostle and a sometimes prodigal church of his.

He wrote 1 Corinthians in response to some concerns expressed by "Chloe's people" (1:11) and others (16:17). They also had some specific questions they wanted Paul to answer (7:1). Through Sosthenes he writes these sixteen chapters of God's Word.

More time passes and then he gets some good news from Timothy about how they're doing. That's when he writes 2 Corinthians 1–9. Lots of encouragements are given, all is good! Like happens in life today, it seems Paul took a break from writing 2 Corinthians. And then...

In other words, drama in relationships is nothing new. With this background in mind, let's think about what 1 Corinthians actually contains.

THE TRUTH THAT CHANGES EVERYTHING

As Paul writes 1 Corinthians it is clear that Jesus Christ and him crucified is the center of all that he says, all that he does:

For I decided to know nothing among you except Jesus Christ and him crucified. (1 Cor 2:2)

From beginning to end Paul interprets every issue in light of ‘the testimony of Christ’ (1:6). Paul’s gospel is fundamentally the story of Jesus crucified and raised from the dead (2:2; 11:23–26; 15:3–5), and he insists that the identity of the community must be shaped with reference to this story (Richard B. Hays, First Corinthians, 9–10).

We will miss the point of 1 Corinthians if we miss its gospel-centeredness.

LIFE IN THE SPIRIT

A second major theme for Paul is what it means to be a people of the Spirit. He calls us collectively "God's temple," because "God's Spirit dwells in you" (1 Cor 3:16). But it's also true of us individually: "Your body is a temple of the Holy Spirit within you, whom you have from God" (1 Cor 6:19). The very Holy Spirit of God is inside you if you are a Christian (1 Cor 12:3). Amazing.

In chapter 2 he makes clear that the spiritual knowledge Christians have of God, we have only because of the Spirit of God (1 Cor 2:10-14). It is the Spirit that gives an unbeliever the ability to understand God's truth.

And then there is the famous extended discussion of what spiritual gifts are to look like in the gathered church and in God's people as the body of Christ (1 Cor 12–14). Three chapters of extended reflection on being a people empowered by the Spirit.

ANCIENT, BUT NOT SO DIFFERENT

Another point made by many commentators is how similar Corinth is to our own day. Those Greco-Romans lived with a worldview 100% opposed to the one Paul was preaching. Anthony Thiselton even says,

All this provides an embarrassingly close model of a postmodern context for the gospel in our own times, even given the huge historical differences and distances in so many other respects....1 Corinthians stands in a distinctive position of relevance to our own times (Anthony Thiselton, 1 Corinthians, NIGTC)

How does Christ and the message of Christ apply to me, my family, my nation, my world? Thiselton is rightly saying that we can turn to 1 Corinthians and see how. Read it with ears to hear God speak to your situation.

A PEOPLE, NOT A PERSON

A final thought to consider as you read 1 Corinthians is that it's speaking to us as members of the church and not as individual Christians. We are addressed as part of the body of Christ and not random fingers, toes, knees, and ankles scattered throughout the world. Hays captures Paul's pastoral mission well on this:

Paul’s pastoral task [is] community formation. Paul is not concerned just with individual edification of believers or with doctrinal teaching in the abstract; rather, his pasoral task is the organization and nurturing of a community....To read 1 Corinthians rightly, we must hear ourselves addressed as the church (Richard B. Hays, First Corinthians, 11).

We will be in 1 Corinthians through August or about 24 sermons. If you want a good short commentary on the letter, check out Andrew Wilson's. If you want something more robust, you can check out the 350-page work of Thiselton's (condensed from his 1400-page commentary!).

Lord willing, the months ahead in 1 Corinthians will give us time to soak in its gospel richness, hear the emphasis on the Holy Spirit, and be strengthened as God's people to better glorify in the world. May this cry of Paul's resonate in you as we wrestle with what he writes:

An Argument for the Existence of God